← back to
Infrequent Seams
Get fresh music recommendations delivered to your inbox every Friday.
We've updated our Terms of Use. You can review the changes here.

Rub Out The Word 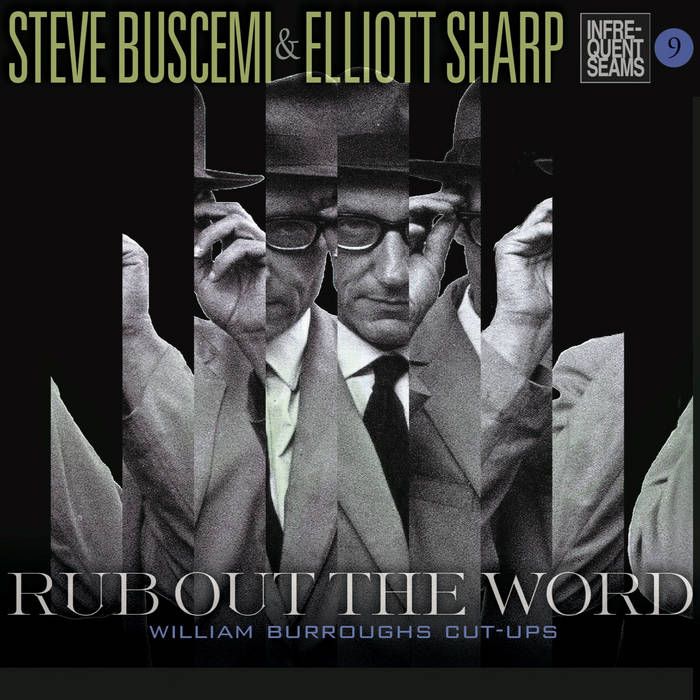 Actor Steve Buscemi and composer/multi-instrumentalist Elliott Sharp collaborate on a new CD based on texts by William S. Burroughs.

Two significant figures in the formation of New York’s so-called ‘Downtown’ scene, multi-instrumentalist/composer Elliott Sharp and actor/director Steve Buscemi have teamed up intermittently throughout the years to perform together. On April 21, 2014, the pair met up at Issue Project Room to kick off the final week of WSB100, New York’s month-long celebration for the 100th anniversary of the birth of iconoclastic American writer William S. Burroughs. Taken from the recordings of that performance, this CD features a series of collaged sounds and spoken texts from throughout William Burroughs’s written output.

Steve Buscemi began his career in, and continues to support experimental theater, writing and performance. From lead roles in television series like Boardwalk Empire to films like Fargo, Reservoir Dogs, Living in Oblivion, Trees Lounge and Ghost World to supporting roles and cameos in films such as The Big Lebowski and Barton Fink, his presence breathes life into every corner of an artwork. Buscemi is a member of Issue Project Room's Board of Directors.

A central figure in the avant-garde music scene in New York City for over thirty years, Elliott Sharp leads the projects Orchestra Carbon, SysOrk, Tectonics and Terraplane, and has pioneered the application of fractal geometry, chaos theory, and genetic metaphors to musical composition. Winner of the 2015 Berlin Prize in Music and a 2014 Guggenheim Fellowship, Sharp has has been featured in the Darmstadt and Donaueschingen festivals, New Music Stockholm, Au Printemps-Paris, Hessischer Rundfunk Klangbiennale, and the Venice Biennale. His Storm of the Eye, composed for Hilary Hahn, appeared on her Grammy-winning album In 27 Pieces. His opera Port Bou premiered in NYC in 2014 and in Berlin in 2015. Sharp's range of collaborators have included Qawwali singer Nusrat Fateh Ali Khan; Ensemble Modern; Debbie Harry; blues legends Hubert Sumlin and Pops Staples; RadioSinfonie Frankfurt; jazz greats Jack Dejohnette and Sonny Sharrock; JACK Quartet; turntable innovator Christian Marclay; and Bachir Attar, leader of the Master Musicians Of Jahjouka, Morocco. His work is the subject of the documentary Doing The Don't and he has been featured on NPR's All Things Considered. Installations include Foliage, Fluvial, Chromatine, and Tag. His Cryptid Fragments was included in the Bitstreams show at the Whitney Museum.

Writer, philosopher, artist, and co-founder of the Beat Generation, William S. Burroughs continues to be a vital cultural force today, 100 years after his birth, and 17 years after his passing in 1997. Burroughs is perhaps best known for his third novel Naked Lunch (1959), a controversy-fraught work that underwent a court case under the U.S. sodomy laws. With Brion Gysin, he also popularized the literary cut-up technique in works such as The Nova Trilogy (1961-64). Burroughs, along with Allen Ginsberg and Jack Kerouac, staged a cultural and literary revolution in the mid- 20th Century. In 1983, Burroughs was elected to the American Academy and Institute of Arts and Letters, and in 1984 was awarded the Ordre des Arts et des Lettres by France. Jack Kerouac called Burroughs the "greatest satirical writer since Jonathan Swift", a reputation he owes to his lifelong subversion of the moral, political and economic systems of modern American society, articulated in often darkly humorous sardonicism. J. G. Ballard considered Burroughs to be "the most important writer to emerge since the Second World War", while Norman Mailer declared him "the only American writer who may be conceivably possessed by genius".

Bandcamp Daily  your guide to the world of Bandcamp

Mille Petrozza stops by to talk about the new Kreator album, plus music by Trauma Bond